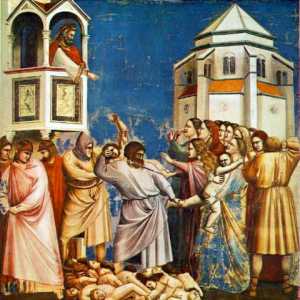 We have met survivors. We have heard stories that claim the grace of God as a miraculous agent for one life spared when many were not. It is the drunk driver she swerved to miss when so many others have met their end there. The plane he did not board which crashed. The children left orphaned by plague who are taken in, nourished and sent to school while most of their brothers and sisters still starve. For Joseph, an angel came. “Get up, take the child and his mother, go to Egypt- Herod is going to kill children looking for the Messiah.” We might desire something more heroic. Something even as simple as an angel who says, “Get up, tell the other families to flee, Herod is going to kill children.” But we don’t get it. Neither do we get to know why, though we may keep asking.

We have seen the tyrants. Worldly power distilled and made paranoid for its own security. Broad, terrible actions, innocents killed. Tyranny begets innocence, strips power away so cleanly that the victims never had a chance, were born into an innocence, void of worldly power. We have seen our own complicity in the tyranny, we have left undone those things which we ought to have done to stop it. We have subscribed to economies of power and wealth and health that have necessitated poverty to level our extravagant claims. Children in Haiti eat cakes of mud to stave off feeling hungry. Children in Nigeria are born with AIDS. Children in American ghettos take their rage to school and are given no place to check it while their privileged counterparts sit in tidy rows and sing songs. The line between complicity and innocence blurs as the tyranny masks itself in the status quo. The Spirit of God hovers over the face of the deep dark mess, a discerning hand holding its jaw, a furrowed brow, and then: grace. But we are not privileged to see what that grace might be, unless we happen to be ministering among it, unless we have left our chair that day where we so often sit, instead, and wonder.

We have heard her crying. “A voice was heard in Ramah, wailing and loud lamentation, Rachel weeping for her children; she refused to be consoled, because they are no more.” She is the hardest one to deal with. We can send money to the rest, (boxed rations, C-grade medicines, a convincing new government program) and go to sleep- but a silence from the wailing cannot be purchased. God tries anyway: “Keep your voice from weeping, and your eyes from tears; for there is a reward for your work,” says the Lord, “they shall come back from the land of the enemy; there is hope for your future,” says the Lord, “your children shall come back to their own country.” And if we, ministers, prophets, anyone who might dare to give human voice to such a message of outrageous, blind hope in the face of Rachel’s weeping, if we are to serve any function in that exchange, how can it be anything other than the face that she will slap when she hears it?

So the priest sets the altar, holds a feast. The frontal and the chasuble which she wears from it are violet- the first martyrs of God’s anointed are too young to give the full, robust, red color of their rendered blood to the vestments of the Church. And as we stand to sing and take our fill we pray, “by your great might, O God, frustrate the designs of evil tyrants and establish your rule of justice, love, and peace,” risking the chance that God might frustrate us along the way. We pray, “Receive, O God, into the arms of your mercy all innocent victims,” risking the chance that God’s arms may try to receive them with the mercy of our own instead.