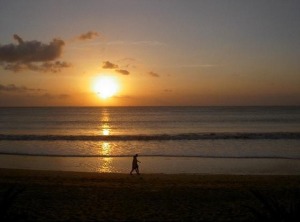 A number of friends on Facebook have been posting today’s Daily Devotional from the UCC’s website.  The sentiment of its title: “Spiritual But Not Religious: Please Stop Boring Me” seems to be striking a viral chord, particularly among clergy, who are, interestingly, the only people I’ve seen reposting this particular article.  In the devotional, a UCC minister laments the apparently all-too-frequent occasion of having to sit next to non-religious people on airplanes and be forced to endure their mundane soliloques about being spiritual, but not religious.  Enough of these people have tried to explain their particular method of finding God “on hilltops, hiking trails and . . . did I mention the beach at sunset yet?” that she is bored by their assault.  One person commenting on a repost of this article summed up an attitude I’ve heard echoed among several priests by saying that this was precisely the reason why he doesn’t travel in a collar any more, because strangers would go out of their way “to share this sort of wisdom with me.”

Heaven forbid that clergy educated in the history, theology and interpretation of the Church should have to endure the private musings of a non-believer.  Instead of dismissing such encounters as spiritually banal, one might take their frequency as a sign that that something is missing from the Church’s presentation of its own spirituality to the world beyond.  “Like people who go to church don’t see God in the sunset!” this author rants, noting the naturalist tones of the psalms and creation stories.  I’m sure most do, of course, just as they also see God in the religious services they attend.  For the religious, God is apparent in both; but for the non-religious person inclined to behold the expanse of creation and know God as present there, God is not apparent in the church building, nor the body gathered within it.  Indeed, the non-religious beholder of religion’s traditions is far more likely to see the demonic elements which they contain: acquiescence, apathy, atrophy, each sanctified in unique ways by localized coalitions of the like-minded.  The author’s point, that it takes more work to recognize the holy with a group of people in a religious context than it does in a private one may be precisely the thing that the Church has stacked against it.  God has a lot more work to do with a group of Christians at practice and prayer to make herself apparent than she does at the edge of a canyon in twilight.  One is more evidently holy than the other.  This is our challenge to embrace.

In which case, my point is only that boredom may not be the best approach we have in our evangelistic toolbox.  Religious leaders, especially when leading visibly with a collar or other sign of association, are evidently -publicly-  interested in spiritual matters, and we may decide how willingly we will communicate that interest to someone who associates contempt, disdain, or hurt with our tradition.  My suspicion is that religious folk, especially religious folk who have bound themselves to the institution in such a grand way as committed ministry requires, use their own dismissive frustration to mask a kind of envy.  Its not fair that some schmuck on the airplane found God by staring down the tarmac this morning as if he might be stoned out of his mind while we were busy hammering out the last details of the upcoming annual giving campaign.  God, of course, is not fair.  God is also often speaking to and through the non-religious, occasionally in terms banal and plain enough to make the skin of religiously educated clerics crawl.  On our better days, perhaps we’ll take an interest in listening.

6 thoughts on “On Religious Boredom; or, Do you wear your collar in the airport?”