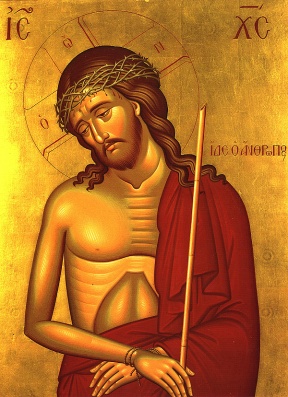 On the sabbath they rested according to the commandment, and I imagine that it felt like the furthest thing from the very first sabbath which their rest was intended to recall. According to the commandment their rest was meant to imitate that first sabbath when the heavens and the earth were finished in all their multitude, and God rested from all the work done in creation. These days had felt more like destruction. For the women who had followed Jesus to Jerusalem, through the raving crowds and shouts of murder, to the cross and to the tomb, these days felt more like the unraveling of every good thing God had given them. For which, they needed rest, all the same, if not more. There was, I imagine, a certain peace to this rest, a certain comfort in finally being finished. The seams had threatened to unravel for so long, they had been exposed by glowering stares at the margins of the public squares where he had preached, they were tugged at each time his disturbing actions flew in the face of convention. Some of the women begged him not to make such a spectacle of his arrival in the holy city, and then there he was, hoisted three feet in the air, a wanted man in plain sight of all, the crowd ecstatic, their cries staked along a thin line between praise and rage. There had been no time for rest in these days among the kingdom of anxiety. Now, all that was finished. His body, once electric with the promise of abundant life, now lay still in a cavern of the earth, and eyes that had pierced anyone who dared return their searching gaze were shut. Likewise, the women rested in the grave stillness of that moment, and their bodies began the gradual unclenching of all the knots these days had bound within them.

This rest comes for us, too, who have followed Jesus on the way to the cross and tomb in our own time. The story of Christ’s passion can be exhausting. It’s telling can unfold like a mine-field of post-traumatic triggers. I, personally, cannot hear of Jesus being taunted, beaten and mocked by Herod’s soldiers without some pretty explicit flashbacks to my years as a slightly effeminate, out gay teen in North Carolina. When we get to that part of the story my body shivers and I weep at the thought of anyone having to endure such familiar degradation and contempt, let alone the love and Lord of my life. I wonder if you’ve had similar reactions to this story, also. Are there parts of it that trigger tears and memories? Are there parts that make you tremble? Perhaps you’re not the crying type, perhaps you feel the twinge of conviction in some other way, a resistance, a tightening in the gut, maybe a wave of nausea. Where does it come for you? Is it in the courtyard, beside Peter as he denies knowing the very one who brought him to new life? Is it with the women who are told that they would be better off barren in this world than with the children they have reared and loved? Is it when we stand together as a congregation, and shout “Crucify him!” every bit as complicit in his death as anyone was two thousand years ago?

Where does the pain and shame of your life rise to meet and fill this story?

That is the place where God holds you now.

In the passion of her Christ our Creator entered in to every bloody, broken thing that we have made out of this world. She has borne the taunts and kicks within us, she has stood toe to toe with our denial. At the cross, the compassion of God is made complete, for there God’s own self has entered even into death with us, that even in the bitter darkness of the grave we should not be parted from God’s persistent company.

God first rested from the magnificent birth of all creation, Christ’s companions rested from the the labors of a gruesome death and hasty burial. Our own rest now comes buried in the knowledge of a God who shares the pain of our failed and fragile human life completely. Our own rest comes amidst the re-creation of this world in an image of solidarity with the criminal, the accused, the beaten and the mocked. In the days to come we will relive this story again in new ways. We will listen to members of our community speak of how our common life rises to fill it even now. Pay attention to the places where it touches you. Rest in this story, let it seep into your bones. Let it loosen up the knotty places which the kingdom of this world has bound within you. The time will come within this rest when the body begins to stir again, and eyes open to behold the dawn.