On Friday when the Supreme Court legalized marriage between two people of the same sex in every state of the nation I found myself imagining -as many queer folk probably did- what it would be like to go back in time and bring my adolescent self forward to see this day. I don’t have as far back to go as some of my elders do, when I was a seventeen Ellen had just come out as a lesbian on network television, most of my friends had the music Rent memorized in its entirely, and all the kids in theatre class were eager to make a token gay friend and only had two of us to choose from. Life was pretty much good. But life at fifteen was a little harder, and it’s my fifteen year old self I’d want to bring forward. Truth be told, I wasn’t thinking much about married life then, I’m not sure many fifteen year old boys have that on their minds. I was only trying to be less of a sissy, or less effeminate, because for a boy to share traits in common with girl is shameful and a cause for ridicule and bullying. I was mad at the world because I had finally been kissed by another boy who then left me behind for someone older. He was older, too, seventeen. I wanted more of something that I hadn’t even known I was missing one month prior, and now I couldn’t have it any more. My angst was complicated when at Chemistry lab one day some other kids told my elusive love that he should really take the cross necklace he was wearing off because it was impossible to be Christian and gay. After an ambivalent debate he obliged, and I was horrified. I went home to write him a letter about how God loved him no matter what, but when I opened up my bible to find some good quotes on the matter I was paralyzed. Who was I to twist this holy book to my own purposes? I closed it instead, and didn’t open it again until I was in my mid twenties.

What would that boy have thought about the scene on Friday? Couples from all across the nation celebrating two by two by two by two by two. I don’t think he would have been impressed. For starters, he wasn’t impressed by much. But more than that he was heartbroken, confused about his faith and incredibly alone. In fact, if it was in my power now to go to him, I don’t think I’d start with bringing him forward to this day at all. I think I’d start by trying to make sure he knew about himself what he was trying to tell someone else: that God loved him, and that being loved by God unfortunately had little to do with the affections of attractive people. I’d also want to explain to him how God had the power to give grace amidst the pain. I’d want to talk about how grace could end up showing him where he was blind to himself and others. I would try to tell him what a gift he’d have in seeing life from the outside, how sensitive he’d become to other people’s hurt, how he’d begin to notice more when someone skulked away and do his best to accompany one or two of them into their potential isolation. I’d try to explain how the othering of queerness is a gift from God, a wound of knowledge, a balm for souls. But he might not have been impressed by all that. He was beginning to write off churchy talk altogether, and didn’t plan on listening to any of it again for quite some time.

In one of the stories from the Bible which we read today there is a man named Titus traveling to a place called Corinth. We actually don’t hear him mentioned by name in the verses which we read aloud, but he’s the one carrying the letter. Second Corinthians is a collection of letters, perhaps as many as six, all pieced together in the hope of some cohesive whole, and they tell the story of a local church in conflict with it’s founder. What we call “Chapter 8” is one of these little letters unto itself, it is a letter of recommendation, commending its carrier to the ones who will receive him, perhaps he had it rolled up in his bag as he went. He’d need a little authority to throw around, Titus was going to the Corinthians to collect money from them. It had been more than a year since they had agreed to take up a collection for the church in Jerusalem, where a bunch of Galilean country bumpkins were trying to live in a big city without their fishing nets to support them, but the Corinthians had been slow to deliver. Paul has a lot at stake. Perhaps he wants to prove himself to the church in Jerusalem, to show them that the churches he has found outside Judea are as capable of bearing fruit as any. Titus, for his part, is described as having an earnest enthusiasm and passion for inspiring generosity in the church. On the letter which he carries close to his chest are words from the Torah: “The one who had much did not have too much, and the one who had little did not have too little.”

Now, these were words from Exodus about the peculiar substance which God fed the Israelites with while they sojourned in the wilderness: mana. Mana was strange. Mana appeared in the morning with the dew. Mana could not be hoarded. If one tried to keep mana till the next day, one found it eaten through by worms. What’s more, when the Israelites went out to collect mana in the morning, when they got back to camp they found that the ones who tried to collect more of it than others still had the same ration as everybody else. That’s where this verse comes from: “the one who had much did not have too much, and the one who had little did not have too little.” What does it mean for a man who is about to ask some wealthy folks for money to have these words written on his letter of recommendation? Why would a rich Corinthian be interested in having as little as an impoverished Jerusalemite? Why would anyone be interested in giving away some of the abundance which they had managed to hoard for themselves?

Paul’s answer is short: because it is a grace, and because grace is of God. “For you know the grace of our Lord Jesus Christ, that though he was rich yet for your sakes he became poor, so that by his poverty you might become rich.” On the letter that commends him Titus carries the story of a god who gave up his own uninterrupted divinity for the sake of being near to us in our isolation, and in that loving nearness to bring us all back home to God and one another. How could anyone emulate such generosity? Titus believed that it began with giving away the power we find ourselves with on earth. Titus believed that it began by ensuring that those of us who have much do not have too much, and that the ones who have little do not have too little. He believed that giving was not a debt but a grace, a thing that made us more like Jesus, an act which held the power of God to transform an impoverished life into an eternal one.

I am thirty-three now. I am married to a man I love. I share his health insurance. We own a comfortable house and eat well every day and night. I find myself closer and closer to the center of this world’s power every day. I am weak enough that the closer I get, the less likely I am to notice someone skulking away, or to want to leave my place of privilege for a sojourn into someone else’s loneliness. And so I wonder: who comes to greet me with a word of God about giving everything I’ve gained away? Who is Titus in my life right now? I have a hunch she may be Bree Newsome, the black woman who climbed up the flagpole outside the South Carolina state house yesterday morning and took down the Confederate flag while reciting psalms. She may be Jennicet Gutierrez, the trans latina woman who interrupted the President’s Pride celebration speech by demanding the release of transgender immigrant detainees. He may even be the President himself, who in his eulogy for state senator the Rev. Clementa Pinckney spoke of the grace God is giving us even now in seeing where we have been blind to our racist past and our negligence of a system which takes 30 lives by gun each day. Each of them invites me to see where I have too much at the expense of those who have too little. Each of them comes to us from a God who became poor for our sakes, who has made us exceedingly rich in the most important ways. What we do in turn with our abundance now is up to us. 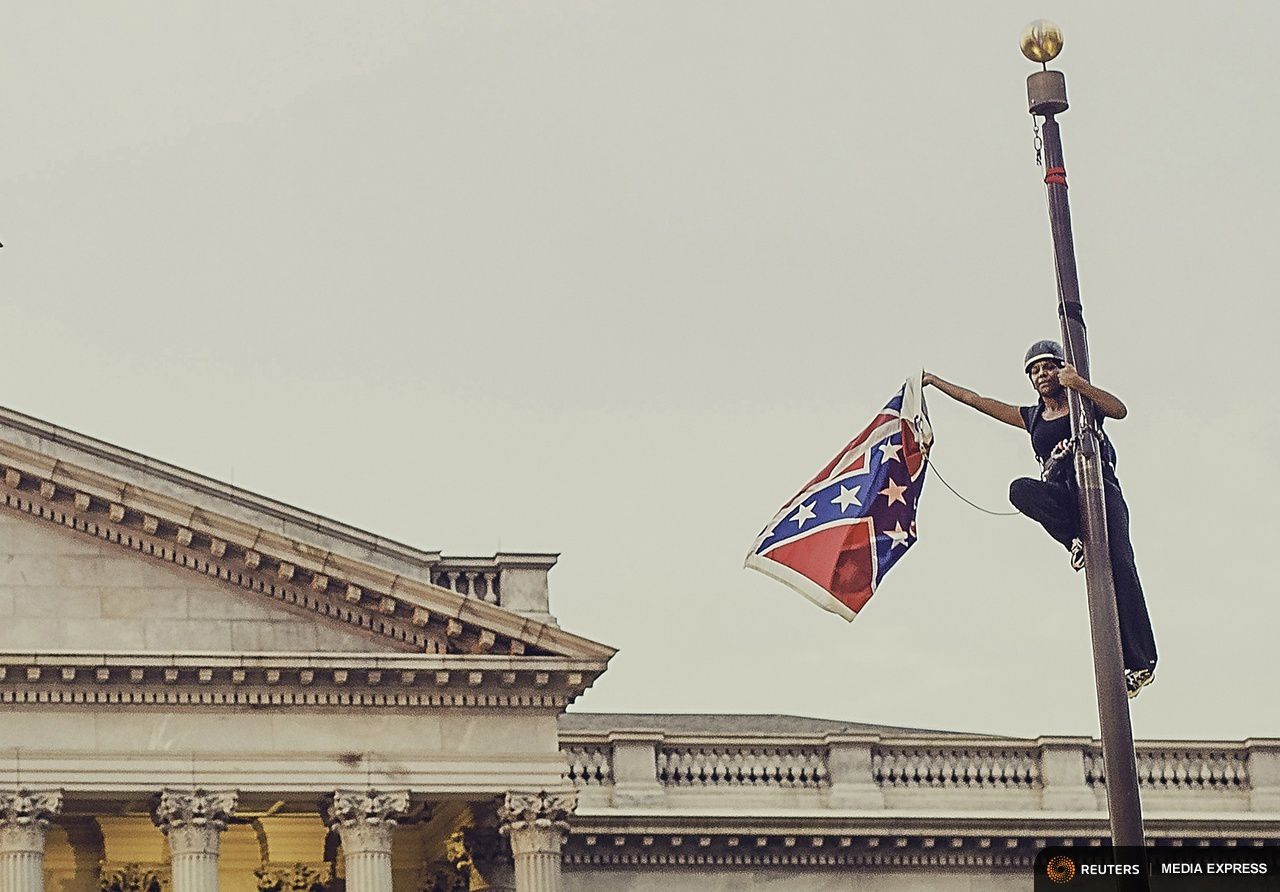 Bree Newsome, my favorite among this week’s sheros